While researching for Kutch, I came across “Rani ki Vav”, I was mesmerised with the pictures I saw, slowly one led to another and a plan was drafted with Ahmedabad as a base and explore three places i.e. Modhera Sun Temple, Rani Ki Vav & Lothal.

Inside the Vav (Stepwell) 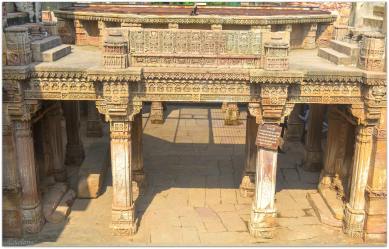 Above three places was supposed to be covered in 1.5 days, remaining spare time, I decided to go for Ahmedabad sightseeing. While going through various sites, I found out that Ahmedabad had more of heritage structures rather than assumed to be just a plain city. Plan was for two days. Being a long weekend, which included Friday, Saturday & Sunday, we decided to go for Friday & Saturday and full day rest on Sunday. 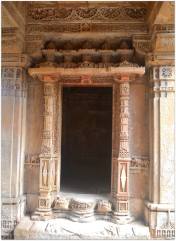 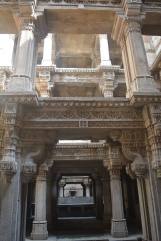 Trains were full, since this plan was conceptualized and people joining the trip was finalized one month in advance.  As usual, all female crew, booked 2 rooms through OYO in Hotel The Grand Marshall. Train tickets to & fro in Ahmedabad -BCT Duronto was booked. One day prior to journey, I booked the A/C cab from Tea2Taxi online for 2 days. (Rs. 9/- per kms, min km to cover was 250) 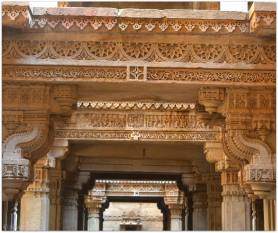 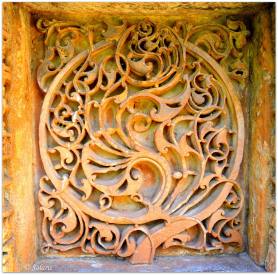 We left on 24th Night, reached 25th Morning at 6.00 am. took an auto till hotel which was on other side of River Sabarmati. Got an early check in at 7.00 am for Rs. 800. Booked car had arrived by then, we left by 9.00 am. First visit was Octagonal Adalaj Vav. This Five Storey Step well was built by Queen Rudabai, wife of the Veersinh, Vaghela Chief. This Vav was used locally by villagers to fill water for daily consumption. There are three entrance stairs, converging at the first storey. There is no roof, the sunlight doesnt reach the stairs except during noon. It was cooler inside, since we were sweating, as soon as we alighted the booked AC Car. The Stepwell is designed in Indo-Islamic Architecture.

I had included it on first day, because it was on the way to Modhera around 10 kms from Ahmedabad.

Architecturally beautiful, Vav was actually “wow”. We clicked some pictures, descended till base and climbed back, sun was shinning brightly by then, no traces of rain or pleasant weather. By 11.00 am, we headed back to the coolness of the cab. On the way to Modhera, we saw many Pani Puri stalls, decided to halt and taste it. Unfortunately, it was not upto the mark.

We reached Sun temple in the noon. This temple is dedicated to Sun God, located on the bank of Pushpavati River.

This amazing temple was built in 1026 by King Bhimdev of the Solanki Dynasty. The temple has been designed, similar to Konark Sun Temple, where the first rays of the Sun cast on the image of the Lord Surya. The temple is raised on a high platform with huge Kund or Pond adjacent to it.

The walls are carved intricately with patterns of Goddesses, Birds, Animals, Flowers, Goddess etc. The pillars are sculpted with these images too.

We left Sun temple by 1.00 pm. At the junction, turning towards Modhera, there was a nice restaurant called Amber Hotel, suggested by driver, we had our lunch there at 1.15 pm.

Next was Rani ki Vav.