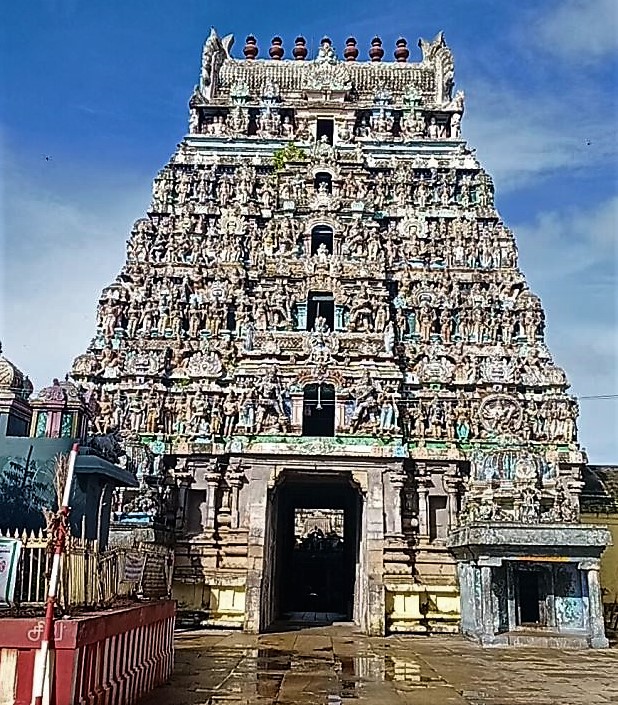 I left the hotel at Chidambaram, early morning by 07:30 am.

Previous night, I had called up a travel and tours owner enquiring about Car from Chidambaram to Vaitheeswaram Koil to Thirukkudaiyur to Mayuduthutai to Kumbakonam. Charges quoted was Rs. 3000. I was not sure about spending so much for this short half day trip. I decided to drop Thirukkaidyur, since it was off the route and asked the quote only for Vaitheeswaran Koil &  Mayiladuthurai (since, both were on the way to Kumbakonam) and further drop at the  Mayiladuthurai Bus Stand. I preferred private vehicle for this route, because opting for bus meant carrying Luggage (9 days) around, which would have caused lots of discomfort. I negotiated the Price to Rs. 1500. He picked me up at 07:30 am. (Car – 09894111877 – Mr. Rajan). He turned out to be very polite and helpful guy. Since, I thought of having the Breakfast on the way, he requested me to hold on till we reach Mayiladuthurai, because, it is a major town and options for Breakfast was good. I didn’t mind, unless the food is good.

First, visited the Vaitheeswaran Koil, reaching by 08:30 AM.

Vaitheeswaran Koil is one of the Nav(Nine)graha (Planets) Sthalam (Place) dedicated to Angarakan (Mars). According to legend, Planet Mars was once afflicted with leprosy and was cured by Vaidyanatha Swamy and from then on, it is treated as Angaraka sthalam. Luckily, it was Tuesday and the temple was beaming with chants and was crowded (not overcrowded though).

The Vaidyanatha (Doctor or God of Healing) temple is dedicated to Lord Shiva, known here as Vaidyanatheswarar (Self manifested or Swayambumurthi), healer of all diseases. There is a Tank within the Complex called as Siddhamirtham, wherein the devotees bath to cure the diseases. Vaidyanatheswarar & Thaiyalnayaki (Shakti) are the presiding deities of this temple. Photography is not allowed in the Temple.

The temple has five tiered Gopuram and large enclosures. Significant feature in the temple construction is that the western tower allows the rays of the Sun to fall on the Shiva lingam (Maragatha or Emerald lingam) for a few days every year. The five Gopuras of the Temple are in straight line. There are two flagposts (Kodimaram) before the presiding deity in gold and silver. Usually the Navgrahas (Nine Planets) are generally in front side of the Sanctum facing different directions in Shiva Temples.

In this temple, they are behind the Sanctum in a straight line. The  The temple has inscriptions from the period of Vikrama Chola (12th century CE), the Nayaks (16th century CE) and the Marathas (18th century). According to the Legends, Jatayu was cremated here. The first enclosure around the sanctum has the image of Subramanya (Karthikeya), worshipped here as Muthukumara Swamy. The other metal images in the sanctum are of Nataraja, Somaskanda, Angaraka and stone sculptures of Durga, Dakshinamoorthy, Surya and Jatayu. The Thaiyalnayaki temple is present in the second enclosure facing south. It also has a small shrine to Dhanvantari and Angaraka.

This town is also known for Naadi Astrology (Palm Leaf Astrology), based on predictions written on Palm Leaves by an ancient Tamil sage called Agathiyar. The leaves were initially stored in the Saraswati Mahal Library in Tanjavur. However, most of them were auctioned during British rule and few are said to be destroyed over a period of time. Families of astrologers from Vaitheeswaran Koil obtained the leaves and passed them down from generation to generation.

Hence, Vaitheeswaran Koil is considered to be the birthplace of Naadi astrology.  It is said that there is a Palm Leaf that corresponds to everyone.

If you find your leaf, you’ll get to know your future! I did not try to get into this, as nowadays there are more chances of getting duped and travelling solo made me reject that curiosity.

I concentrated on Vaidyanatha Swamy Temple and its architecture.

Winding up the visit by 10.15 am, Next stop was Mayuranathar temple at Mayiladuthurai.