We reached Bomdila by 3:00 PM in a sharing Sumo all the way from Guwahati, we were dropped at Taxi Stand. Since, we didn’t book Bomdila Stay, and the temperatures were freezing, we booked the hotel opposite to Stand. Hotel Siphiyang Phong looked great from outside but, eventually turned out to be the worst hotel of the entire trip. Charges were Rs. 1400, we hoped for good stay. The good reviewed hotels like Anu Homestay & Hotel La were full. The fog had enveloped the whole area. As we checked in, we realized there was no water, Room was too small, bigger ones were too expensive & not worth the money. We were told water will arrive in some hours, hence, we thought of wandering locally to check out the place. We went to nearby Park with a Monastery, there were lots of flowers.

We strolled around clicking pictures. We came back to the hotel, water supply was not there. Reason given was, entire Bomdila is facing water shortage & there is some issue with the pipe supplying the water and repair work is going on, water will arrive by 8:00 PM. We were literally stuck that time. We went for food and realized most of the restaurants close down by 7:00 PM.

Fortunately, there was a small restaurant open, managed by a Lady. We ordered Chicken & Veg Thupka. 2 big bowls arrived. We ate it scrumptiously, and left for hotel hoping for water supply. Still the work was going on, we didn’t venture out, slept the night off, only to realize the water was not available even in the morning. I was furious and told the reception, that I won’t be paying full amount, if we don’t get water. He provided us a bucket of water. Instead of letting it affect our itinerary, we got ready and left for Taxi Stand, enquired for Chillipam Monastery in Rupa. We hired a taxi for round trip including a visit to Bomdila Monastery (Rs. 1400). Rupa was on the way to Bomdila, if someone is travelling from Kalaktang. We arrived from there itself, but didn’t stop over because of shared sumo and it would have been very costly to hire a taxi from Rupa to Bomdila. 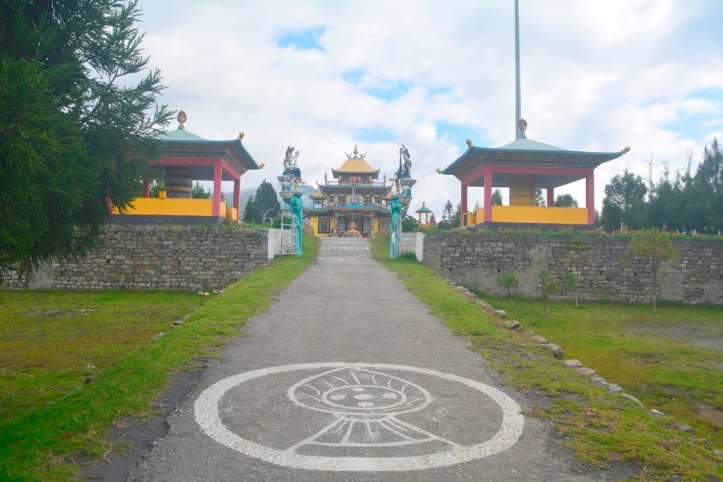 Chillipam Gompa is located on a hillock, also, called as Sang-ngag Choekhor Dargyeling Monastery, has a magnificent Buddhist art. It is said to be the only Gompa in India to be built by Chinese architect. It has a spectacular 270 degree view of the surrounding Himalayan Valley. There was hardly anyone around. Many people skip this monastery in favour of more known ones in Bomdila and Tawang. But, I made a point to visit this Gompa, because of its location and had read about beautiful view from top. The monastery has two additional floors. The lower one was closed, although I was told that they can open it for us to view.

But I was too engrossed in admiring its grandeur, sculpture and artistry. We took almost an hour and more to capture the valley views and Gompa itself, thereby getting short on time. We had a breakfast at Rupa. I don’t remember the name of the hotel, but the food was very tasty.

We even complimented the owner, who was making sure we ate well. We had to get back to Bomdila by 12 and move further to Dirang, if possible. Already, the water shortage had bugged us from Bomdila. We reached Bomdila by 11:00 AM and on the way, at Taxi Stand, enquired about Dirang travel. There was a Sumo that would leave by 12:00 noon. We booked immediately (Rs. 150/head) and went ahead to Bomdila Gompa.

Bomdila Upper Gompa was located on the upper side of Town, as the name suggests. Built in Year 1965, also called as Gentse Gaden Rabgyel Ling Monastery. We clicked some photographs and moved back to Hotel to check out. By that time, water had started flowing from tap. During check out, the amount went to 1550 due to GST. I told the staff, about the pathetic condition and the amount charged doesn’t match. In this mess, I forgot my jacket in the Room, which I remembered while landing in Dirang. Well, that’s another story and I did not get it back either even after informing the staff and visiting the hotel again on the way back.  Hence, the worst hotel tag!

#potpourri of #food
Nestled nicely in between the mountains with lush greenery,
A beautiful lake is located at 7800ft, 3 km uphill zig zag trek leads you to this jaw dropping location called Deoriatal (Tal means Lake) from Sari Village, which again is a whole day travel from Rishikesh through Dev Prayag and Rudra Prayag. The whole area is blooming with Rhododendron at this time😍😍
Starting off with this photography😁😁