After winding up the Jhansi Fort, we hurriedly moved ahead to Orchha, hoping to catch some clicks in Sunset.

We drove out of city, to Orchha hardly 30 minutes’ drive. But due to snack break at the junction and 10 minute’s halt at railway crossing, we reached in an hour. Sun was slowing descending down and I was worried about not being able to click any pictures.

As soon as we reached the Orchha Fort entrance gate, a guy came to ask for parking charges and also said that fort closes by 5.00 pm. And the temple opens by 8.00 pm for puja, only thing open to see was River Betwa. We felt cheated and argued with the auto driver, if he knew we won’t be able to see anything then why did he brought us down here, rather we would have explored Jhansi well. Instead, he feigned ignorance.

Since, there was not much we could do, we made him pay the parking charges and went to check out the Betwa Riverside and location of Chattris (Cenotaphs). We saw some structures and walked towards it. It was cenotaph. Same was closed but decided to come next morning. The sight was beautiful because of sunset. We walked back to the parking lot. Took the auto back to the hotel.

For next day, we needed a car for travelling from Jhansi to Orchha and then further to Khajuraho. We walked around the crossroad near our hotel (where the auto driver left us) , and called up few taxi services before booking with Orchha taxi service for package of Rs. 2850/-.

It seemed fine for us, because no one was ready to go lower than that amount, being the wedding season. Since, we had some snacks while going towards Orchha, we were not in mood to eat heavy dinner, saw the Baskin Robbins outlet, had ice-cream, then stopped by Spice restaurant next to our hotel for some light dinner. We called it a day thereafter, slept away.

Day 2: Next morning, we checked out, car was already at the entrance by 7.00 am. Again, traveled through same road towards Orchha. We reached Orchha by 8.00 am.

Since, we were all hungry, we had the local MP breakfast at the small hotel outside fort i.e. Samosa chaat, Moong Bajiya, Tea etc. We first visited the beautiful Chattris (Cenotaphs). Cenopaths or memorials of Bundela Rulers were constructed in between 17th & 18th century. There are 14 of them. The area has been maintained very well and good place for photographs. Since, we reached there early morning, there was hardly anyone to photo-bomb. The Cenotaphs are located near Kanchan Ghat on banks of River Betwa. The Cenotaphs have been built on the spot, where the members of the Royal Family were cremated. 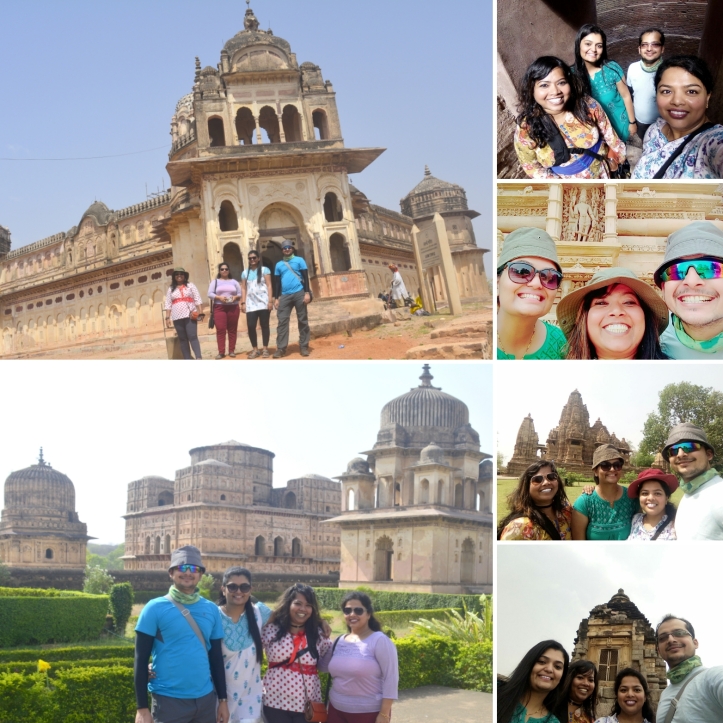 (The Bundela-style of architecture, however, is a harmonious amalgamation of Mughal and Rajput influences, as reflected in the cenotaphs of Orchha. The cenotaphs have been constructed on raised platforms and designed in the form of tall, square buildings with a domed pavilion on top called Chattris. A common feature of most Indian architectural styles, a chatri, from the Persian chatr or the Sanskrit chattra, is a type of trabeate domed canopy, resembling an umbrella or a parasol. Since Hindus are cremated, the cenotaphs are empty structures, but the chatris have become the living quarters of a colony of vultures, a critically endangered species. – https://www.atlasobscura.com/places/cenotaphs-of-orchha)

The architecture is so beautiful, you cant help clicking away the postcard pictures of those Chattris. These Cenotaphs are the main attraction which actually drew me there. After some photo-ops with the chattris, we proceeded towards Laxmi Narayan Temple.

(This mix of a temple and fort is a geometrical wonder with an octagonal central tower residing within a triangular temple and housed in a square compound. Its ceilings and walls depict stories of mythology, history and warfare. The temple is an architect’s delight and the temple may appear rectangular from the outside but is a perfect triangle within. As the Raja of Orchha was supportive of the British, there are many paintings that depict their lifestyle and culture. Vignettes from the siege of Jhansi can also be seen through the panoramic ceilings of the temple. Similar to Raja Mahal, the ceilings of the temple depict stories of Mahabharata, Ramayana and victory of gods over demons. The terrace or topmost part of the temple bear intricately carved domes and the windows feature keyholes that were probably designed to position archers and soldiers who could attack when needed. The inner sanctum seems to resemble that of a tantric cult; however there is no clear evidence to any tantric activity.

Though the temple is known to be dedicated to Goddess Laxmi; however one cannot find any idol of the goddess within the temple. The only idols that can be found in this temple are a statue of Ganesh at the entry of the temple and there are some stone idols of Krishna and Rukmini that have been installed quite recently in one of the corners of the temple. – https://timesofindia.indiatimes.com/travel/destinations/Laxminarayan-Temple/ps46699180.cms)

We spent 30 minutes there before proceeding to Orchha fort – grandeur on its own. It is a Fort complex, with three palaces – Raj Mahal – the main Palace, Jahangir Mahal – built in memory of Emperor Jehangir & Rai Parveen Mahal – Palace reminiscent of romantic tale between a Musician and a Poetess. Here Lord Ram is not worshipped as God instead as Great King. This huge fortress was built by Bundela Rajput in 17th century as an island fortress on the river Betwa. It will take some time to go around to absorb the architectural beauty.

We had to wind up the trip by 11.00 am and proceed further to Khajuraho.