Your visit to ancient temples in Tamil Nadu is not complete, if you miss out this breath taking temple replete with ornate art.

The Chola rulers carried forward the Dravidian architecture of temple-building set by the Pallavas and made sure to take the design to the next level. As per the literature, the temple is said to have been built with Nitya-Vinoda- “perpetual entertainment” in mind.

When compared to the other two great temples (Gangaikonda Cholapuram & Tanjavur), both of them are grand in size, while this one is modest, known for its intricate art and incredible architecture, making it my favourite among these three.

After the crisp short visit at Mayiladuthurai, I took the Public bus from Mayiladuthurai Bus Stand around 12 noon. I was more than excited to visit the Airavateshwara Temple, one of my bucket-listed temple. 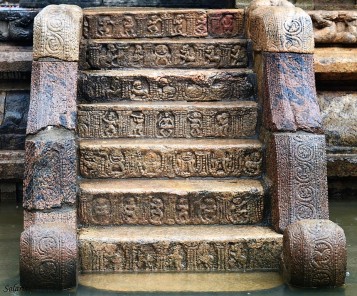 I had booked Hotel Athityaa, 2 kms from Kumbakonam Bus Stop. I reached Kumbakonam Bus Stand by 1:00 PM. Took an auto for Rs. 60 to Hotel Athityaa,  Checked in, ordered Dosa for lunch. I rested for sometime to avoid the afternoon Sun. I left around 3:00 PM, hired an Auto for round pick and drop including waiting charges, to Darasuram – Airavateshwara temple (Rs. 200). Darasuram is 10 minutes from Kumbakonam. After reaching the temple gate, the driver asked me to pay half the amount. I was skeptical that he may not come back and I will have to search for another alternative to go back. After arguing for breaking the deal, I was totally miffed, a local intervened, he too scolded the driver for taking me for ride. I gave the auto driver Rs. 100 and skipped further altercation to save time for the temple visit. The local later asked me to visit his home to see the handloom weaving Tanjavur Silk Sarees. I agreed to visit while going back.

The Airavateshwar temple is one of the most beautiful temple, I have ever seen, one can say treasure trove of Art and Architecture, actually a jaw dropping wide eyed moment.

More than a century after Rajendra Chola I built his royal temple in Gangaikondacholapuram, the Airavateshwara Temple of Darasuram was built by Rajaraja II, the ruler of the Chola kingdom from 1143 to 1173 and it is placed third, after the two famous Chola temples of Thanjavur and Gangaikondacholapuram. 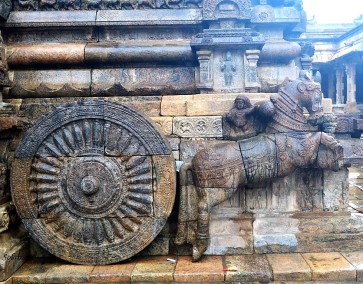 Stone wheel & Horse of the Chariot

This temple is part of the UNESCO World Heritage Site ‘Great Living Chola Temples’. The three temples are almost in a straight line with Darasuram in the middle, and Thanjavur and Gangaikondacholapuram on either side, at 40km and 35kms respectively.

As per the Inscriptions, this temple was referred as Rajarajeshwaram. The temple was called as “Airavateshwara” few centuries later. As per the Legend, Lord Indra’s white elephant, Airavata, lost his pristine white colour because of a curse by Sage Durvasa. He regained the white color, after praying to Lord Shiva and immersing himself in the Temple Tank, giving the temple its name.

As per another legend, once Lord Yama was cursed by a Sage, causing his skin to burn. He took dip in the temple tank to wash off the curse and was cured by Lord Shiva (called here as Airavateswar). Hence, the temple Tank is called as Yamatheertham. The image of Yama seated on a Pitam (Pedestal) is in the inner shrine.

Temple complex has high walls around Prakara (Temple Compound) with many small couchant bulls sitting on it. There is a Mahadwara which is in ruins, ASI  has reassembled some part of it. After the Mahadwara, there is a well maintained garden with a path leading to Balipeetam (Sarcifical Pedestal) and Nandi Mandapam.

The flight of steps leading to Balipeetam are said to produce musical notes, which was covered with Iron fences, maybe to avoid people from destroying it by tapping.

The rain was playing spoilsport. But realised it was a boon, because the crowd was not there and I got lots of pictures without anyone photo-bombing it. Because of rains, the entrance was filled with water. I had to wade in knee deep water to reach the entrance. I was guided by the local to walk by clenching the toes inward, concaving the foot to get the grip on the slimy, moss covered stone floor, thus, avoiding the fall (learnt something new).

As soon as you enter the second Rajagopuram, you are welcomed by the finely sculpted view of the Pillared mandapam preceding the Garbagriha and further moving towards the left side, there are stairs that lead to the Rajagambhiram Thirumandapam.

The most spectacular and jaw dropping (totally awestrucked) Mukhamandapam shaped in a form of Chariot with large stone wheels that Lord Shiva rode in his manifestation as Tripurantaka, with one burning arrow, to destroy three cities (tri means three, pura means city and antaka means someone who destroys) which was controlled by three demon brothers. Lord Brahma is depicted as the charioteer, and the vehicle is pulled by galloping horses and elephants.

Eight pillars with Gaja yalis or griffins at their bases hold up the chariot, and five niches adorn its front, with images of five deities – Agni, Indra, Brahma, Vishnu and Vayu. I was filled with amazement with the magnitude of structure for sometime.

And at that moment, it began raining heavily (with company of best friends – Thunder and Lightening) and the light within the temple blew out. After mukhamandapam, there is Mahamandapa and Artha mandapa, finally leading to the Garbagriha (Sanctum Sanctorum).

There is a 1.5 metre high Shiva Linga in the Garbhagriha, 47 ft high Vimana and there are 4 mandapams in four corners. A small shrine dedicated to the Saint Chandikeshwara, added later by Nayaka rulers, stands adjacent to the Vimana.

There are friezes depicting Lord Shiva in different forms, the battle between Vali and Sugreeva, stories from the Mahabharata, the lives of the Nayanmars or Shaivite saints, etc. Episodes from Hindu mythology are carved on the pillars of the mandapas in front of the garbhagriha.

There are many unique sculptures in this temple. The Carving of Rishabha Kunjaram – an amalgamation of Bull and Elephant, two animals sharing a head. I also saw this sculpture in form of painting at Tanjavur Palace Complex and as Stone Art in Swami Ranganatha Temple in Tiruchirappalli.

There are 73 panels of sculptures depicting the life 63 Nayanmars (also called as Nayanars were a group of 63 Saivaite Saints during the period of 6th to 8th Century). There are 108 Devara Othuvars, who sung in the temple during the time of Raja Raja II.

There are sculptures of river goddess like Cauvery, Ganga, Yamuna, Godavari and Narmada in the human form till hip level and the lower part is depicted as circles. Sculpture of Ganges is in complete human form carrying water vessel in one hand and lotus flower in another.

There were very few people around. A small group foreign tourist were present alongwith the guide. I didnot hire the guide, instead took my own time to leisurely watch the Art.

This temple marked the beginning of the practice of building shrines dedicated to the Goddess as Lord Shiva’s wife. It has a separate enclosure of its own. I was not sure of entering this complex. Due to rain, the floor was covered with knee deep rain water and greenish algae had formed a slimy cover and no one was around.

I wondered, If I fell, it be disaster for myself and my camera and if i skip, I will regret it later. The local saw my concern, he asked to walk the same way, by leaving the sandals at the entrance. Again, using the same method of walking by cupping the foot, I managed to reach the stairs and was happy to check the temple.

As soon as I came out, the local guy was waiting for me to visit his home for Sarees. The sarees were priced above 1000, I couldn’t say no and bought a saree for Rs. 1200. I facepalmed myself later.

Well, the local atleast guided me through the area. I came out on the road, asked for the Bus to Kumbakonam, small boy was waiting there.

He told me to wait there itself. In next five minutes the bus arrived. I reached Kumbakonam Bus stand in 15 minutes.

Got down at the junction, which led to Hotel Atithyaa, there was a Cake shop, felt like craving, bought a Bread Pudding and Chocolate pie. Avoided eating them in night, kept them for the morning. Later had dinner at the nearby restaurant. Retired for the day.